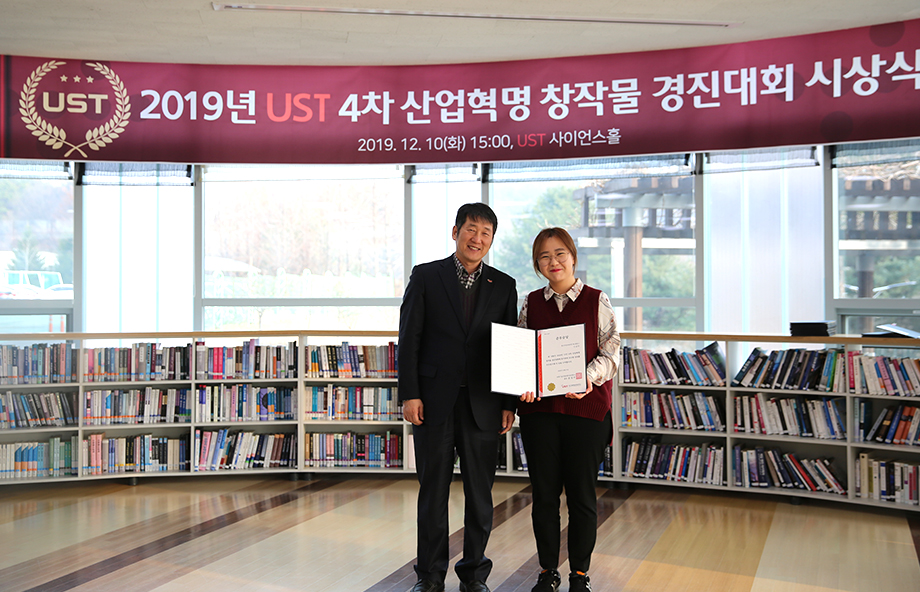 1On Dec. 10, UST Science Hall was filled with applause at the awards of the Fourth Industrial Revolution Creation Competition that was held for the first time this year. The event was held to encourage UST students to hone their skills in Information and Communications Technology (ICT) in the age of Fourth Industrial Revolution. We met Lee Nam-ju, Gang Da-jin and Lee Nan-yee who claimed first prize in the competition. Lee and Gang, especially, took extra time to participate out of their busy schedule since they are graduating soon this coming February. We wanted to hear their passionate story where they worked hard for the competition over three months. 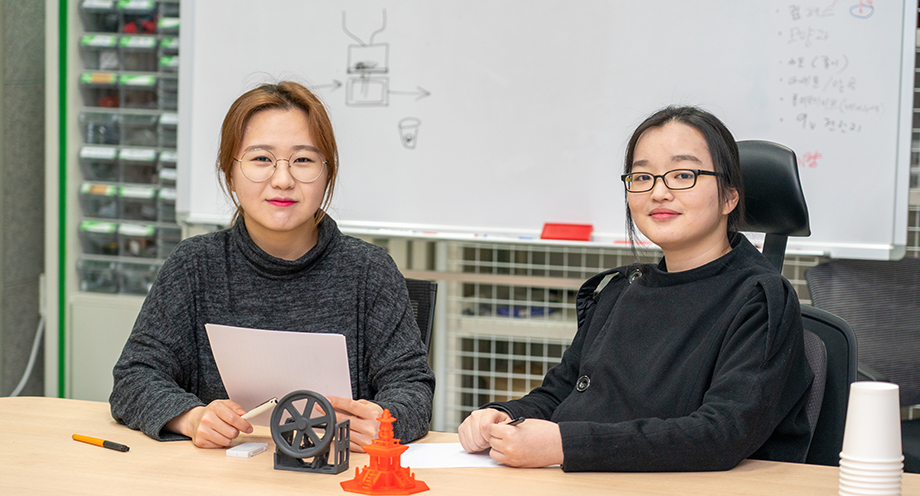 Their Fates Connected at Freshman Orientation 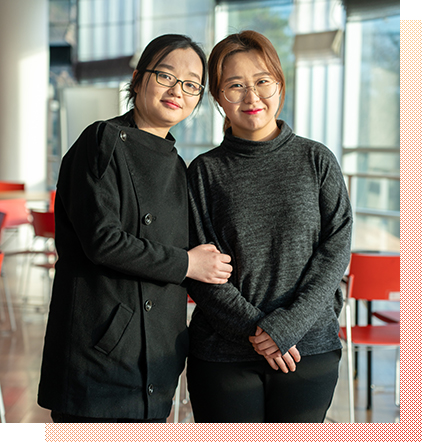 Lee Nam-ju, who is studying at KIGAM campus, has been conducting research on how to recycle municipal solid waste incineration ash. Organically, she was always interested in plastic waste, which became one of the most significant issues in the country. While pondering the question, she has developed a wonderful idea which she wanted to see objectively validated through the competition. She formed a team with Lee Nan-yee from KRIBB School and Park Woong from KIST School. Together they participated in Ecothon ICT Idea Contest hosted by the Ministry of Environment where they won first place.

One day, they saw the notice for the Fourth Industrial Revolution Creation Competition. The event was for teams of two to three students to create work based on ICT convergence technology such as Internet of Things (IoT), big data, 3D printing, or artificial intelligence. Lee Nam-ju and Lee Nan-yee had ambitions to give shape to the concept that was recognized in another contest. They formed a new team by recruiting Gang Da-jin who majors in Computer Software in ETRI School whom they expected to play a core role in the competition.

“We entered school in the same year. We met in freshman orientation class and got close to each other while taking a class together for a month. This class was actually the secret for my ability to recruit members for our team. I had a lot of opportunities to engage in conversation with future professionals in a variety of fields” (Lee Nam-ju)

The barcode bin they developed is a plastic automatic separation and discharge system for a complete resource recycling society. The video image analysis allows the system to separate plastic from other waste such as glass, aluminum or cartons. They drew inspiration from the film Minority Report which features a scene where a security camera is analyzed using Deep Learning that helps the protagonists catch the villain. Under the same concept, their barcode bin is also developed to analyze video images to isolate plastics.

The current recycling system in Korea is relying on people’s individual conscience. Ministry of Environment announced that half of the trash disposed in a standard plastic garbage bag is recyclable. The members of the team thought if the recycle system doesn’t rely on individuals and instead on automation that systematically disposes the waste, it will likely contribute to better utilizing resources.

Teams that passed the application process were given three months to work on their final project. The team members were swamped with their responsibilities from work at school and preparing for graduation on top of their project for the competition. Though three months were hectic and difficult, it was still a precious time for them to learn more and share great memories. 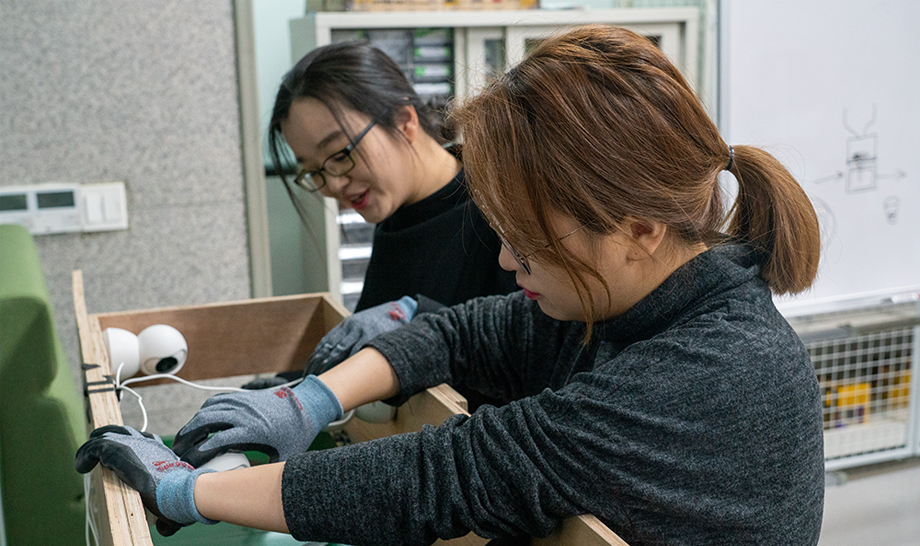 “Our initial plan was to make the body of the barcode bin using a 3D printer. While trying for two weeks, we had to face that 3D printing has a limitation. It takes 15 hours to print something as small as your hand and it’s not even good quality. We couldn’t believe how inferior it was, thinking it’s not even close to advanced technology. So we gave up 3D printing without hesitation, instead moving on to wooden material and commercial products. In order to produce the bin with the new material, we met with the owners from Industrial Materials and Tool Dealers Complex in Daeduk-gu and Cheongchun Carpenter’s Shop DIY Cafe, which was extremely helpful. They were very kind teaching us a lot of things. Cheongchun especially didn’t mind working till late night to help us finish the product. We really appreciated it. We want to bring some snacks and visit him sometime soon.” (Lee Nam-ju)

“The most challenging part for me was to categorize what I see on the screen. The laptop UST provides didn’t support the Deep Learning model so I had to go back and forth between UST headquarters and ETRI to modify the model and test it again. I recall this memory as a challenging yet happy moment.” (Gang Da-jin) 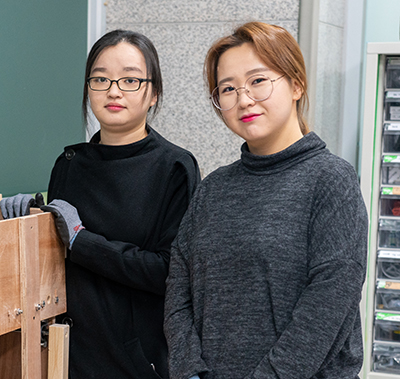 Dreams and Goals Nurtured in UST

Lee Nam-ju is conducting research on stabilization technology for making inorganic waste higher value. She seeks to take it one step further by trying to figure out how to reclaim resources from inorganic waste. Gang Da-jin is working on an electroencephalogram signal processing and classification Deep Learning model. Quantifying cybersickness as a stepping stone, she attempts to categorize biosignals such as brain waves into various psychological symptoms. 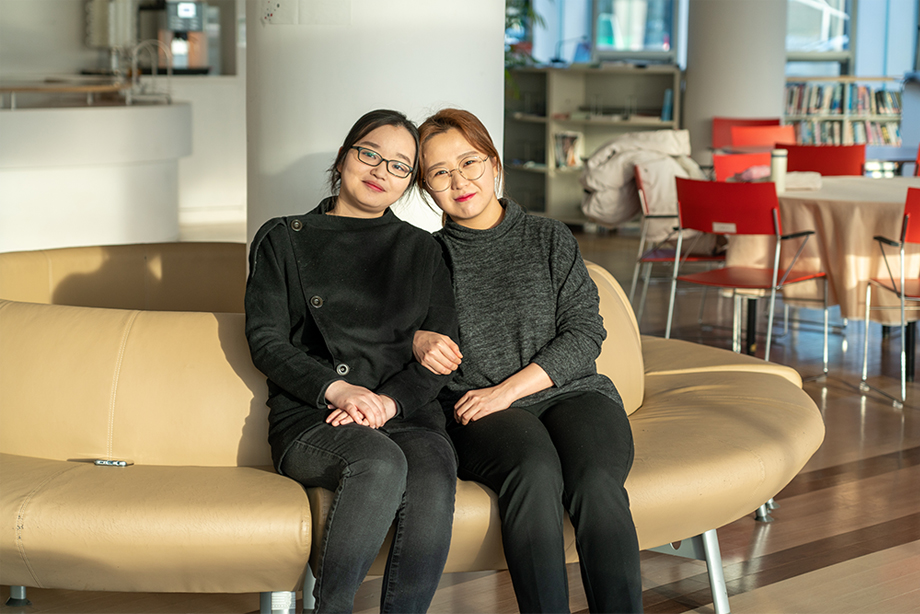 Congratulations on winning first place in the Fourth Industrial Revolution Creation Competition. We hope these friends maintain their friendship not only as friends but also as research partners over the course of their lives. We also deeply hope that the invaluable relationship made in UST is always with you. Though Lee Nan-yee’s busy schedule didn’t allow her to be at the interview, the other two friends showed their passion and strong friendship.