Developing a Light-Weight Robot Arm with High Capacity, “I’d Like to Be an Expert in Hydraulic Collaborative Robotics” 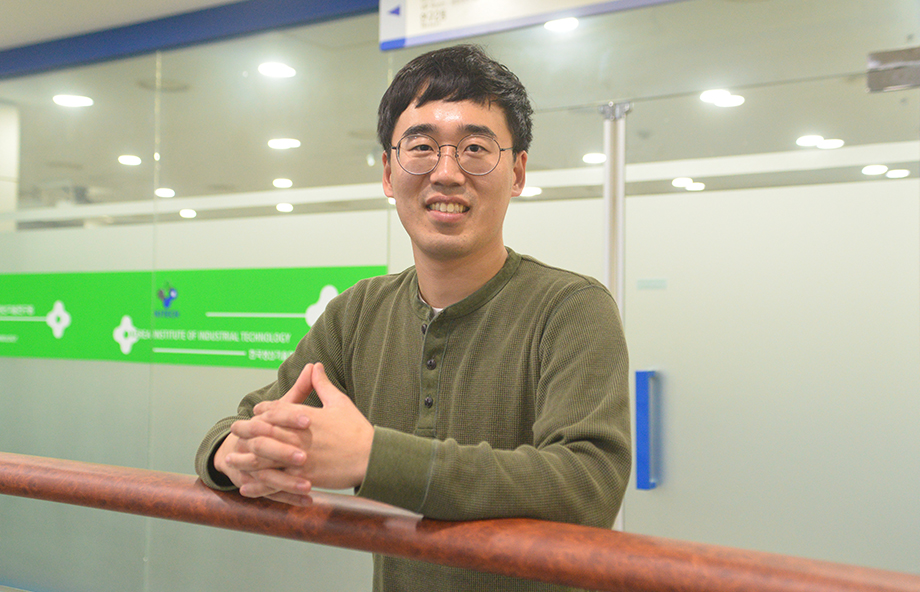 Developing a Light-Weight Robot Arm with High Capacity,
“I’d Like to Be an Expert in Hydraulic Collaborative Robotics”

One day in January when winter rain came to drench the soil, we visited KITECH Ansan Research Center to meet Kim Jung-young, who is completing his doctorate degree in UST-KITECH School. When he guided us to Hydraulic Robot Research Lab, where we were able to see a hydraulic robot, walking robot, wearable robot and others currently under development. Si-Fi films were the only place we could see robots a few decades ago. In modern days, however, robots have been playing a significant role from industrial sites to everyday life, and is only expected to grow even bigger in the future. Today’s interview felt more special because it meant that we were able to witness the future of Korea’s robotics industry. 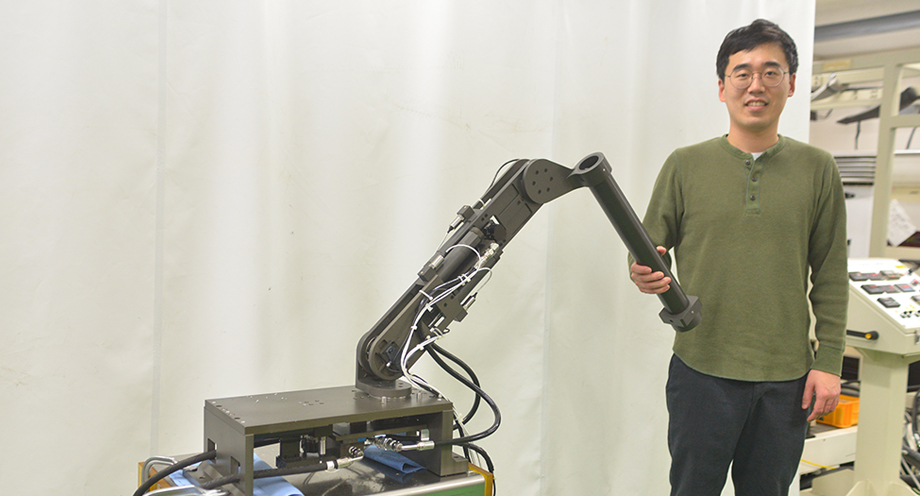 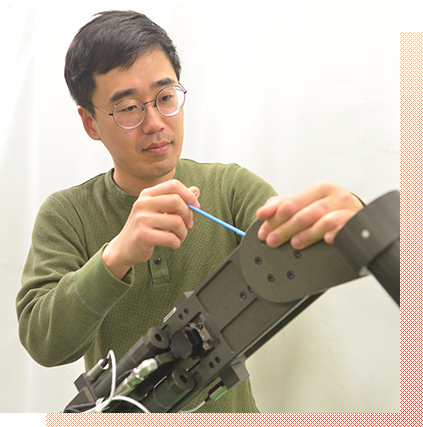 It’s been 5 years since Kim entered UST-KITECH School in 2016. Since he is graduating next year, we assumed that he would be one of the highest senior researchers. So we asked what his “best moment” was as a UST student. His answer was the two years of participation in the Young Scientist Training Program and achievement he has made through the program. Kim was selected in the Young Scientist Training Program in 2018 and his work was recognized as the most excellent project in the program. Seeing the result, Kim’s research seems like it has been on the smooth path, but it wasn’t always the case; it was actually the outcome he earned by struggling to make it work.

“I applied for the Young Scientist Training Program to receive funds to continue my research. When the program’s application opened in fall 2018, we only had 6 months left for the research in which my own project was included. If I wanted to continue researching under the same subject, I needed another follow-up project. However, I couldn’t guarantee it. Anxiety that the research topic might have to be changed if I couldn’t continue researching as a follow-up overwhelmed me.”

That’s the reason why Kim desperately needed to be accepted in the Young Scientist Training Program. When he was accepted, he was able to continue his research project. The program offered him a variety of opportunities: he developed his skill as an independent researcher by learning the overall process of his research project as well as being able to conduct research exchange both at home and abroad.

“The Young Scientist Training Program motivated me to have a clear picture of my motivation and purpose of researching and defining the problem. Before I got into this research project, I limited myself and researching only the subject my academic advisor suggested. I still have a long way to go, but this experience changed me to be a more responsible person in my research.” 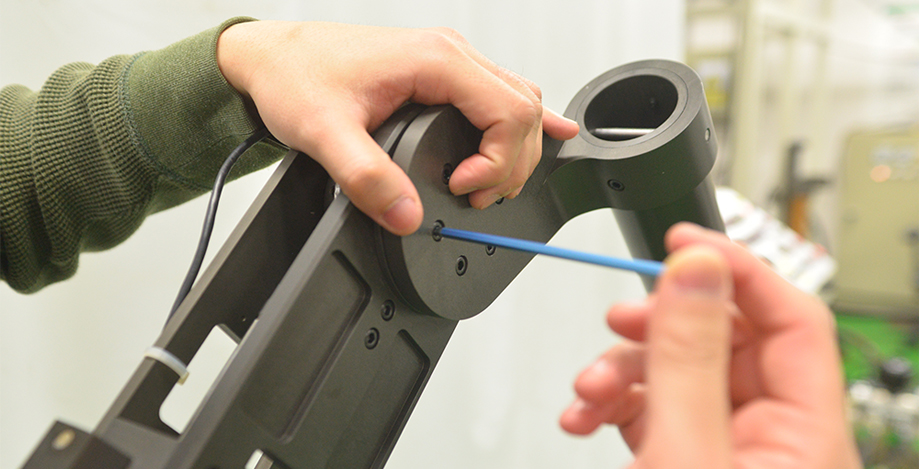 Kim’s research has led him to develop a cable-driven hydraulic actuator module. This is characterized by light weight and a wide range of operations, while producing output as powerful as conventional hydraulic actuators. Furthermore, using this, he recently developed an advanced manipulator. Electric motor driven manipulators are common in the current collaborative robotics market. He developed a manipulator that is capable of handling more than 10kg of weight and is at least 10kg lighter than an electric motor manipulator with the same output.

“I'm looking for ways to close the gap between the hydraulic robot and the electric motor robot. I aim to make a light weight robot with high capacity, which is the advantage of hydraulic robots, while enabling it to conduct most of what conventional electric motor robots do. If this research turns out to be successful, I believe we can realize that collaborative robots that can be applied from assembly of parts unit to assembly of large systems such as automobiles.” 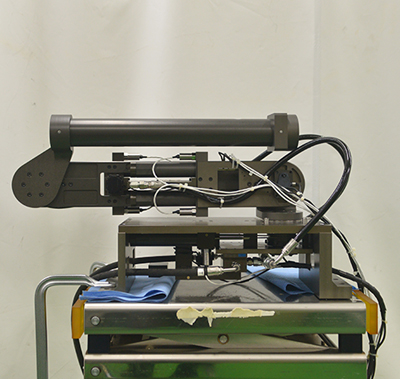 Kim has entered the school as a PhD student after finishing his master’s degree. Since it was a rare case, we asked why and found out how deeply he had to wrestle with the thoughts that any graduate students undergo. He applied for the master’s degree in UST in hopes to lead his own research, only to feel frustrated by the world of difference between his vision and reality; there was barely anything master’s student could do by themselves. 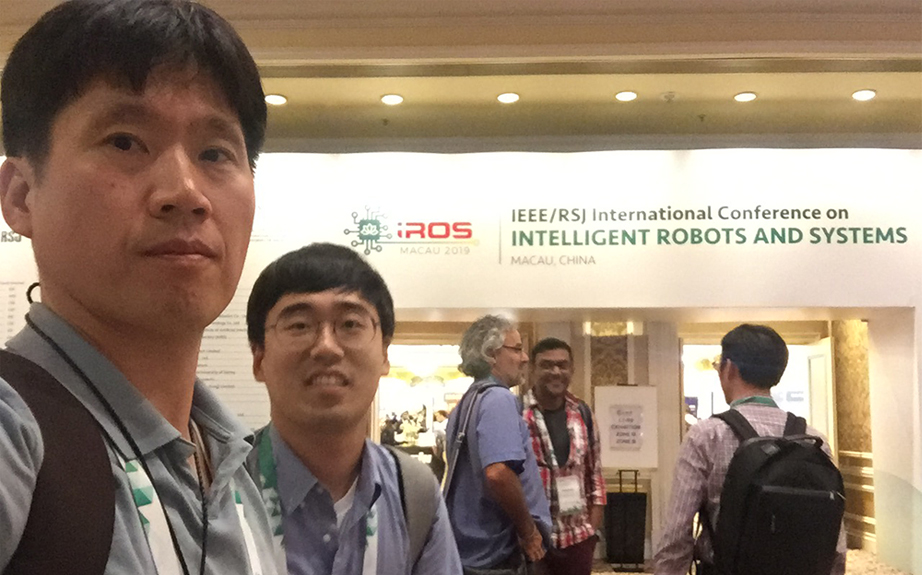 It was Professor Park Sang-duk and Jo Jung-san who brought him back to the path of education. Professor Jo Jung-san, particularly, gave him genuine words of advice when he struggled. Thanks to his support, Kim is filling the white canvas of his research world with a variety of colors, along with overcoming challenges, passion, and a definite goal.

“I’m not sure I’m qualified for giving advice to fellow students, but if I’m allowed, I should tell you that you shouldn’t regard failure in research as failure in yourself. Rather than letting the fear of failure stop you, keep trying to think about the way to do your best in any given situation. Earning a degree only happens once in life anyway!” 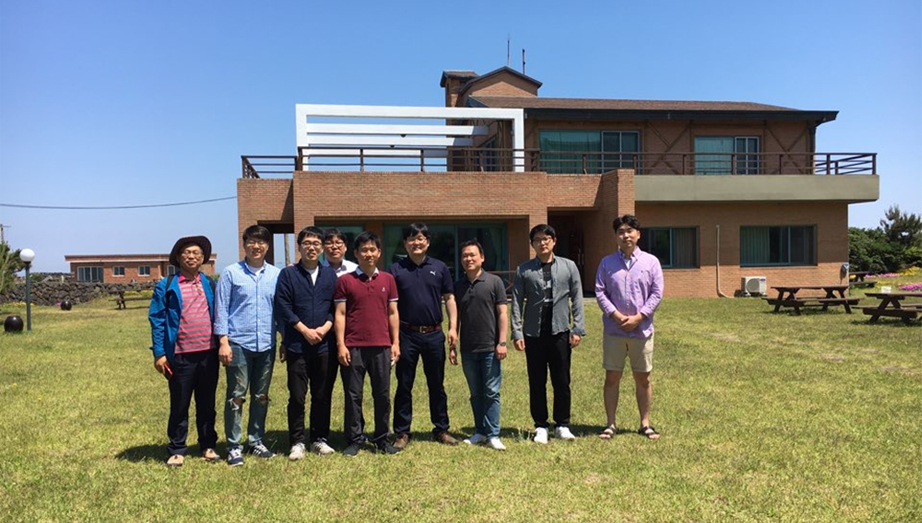 Kim plans to carry out two kinds of research. First, utilizing the project outcome accomplished in Young Scientist Training Program, he wants to maximize the function of the hydraulic actuator, which is going to pave the way for developing hydraulic manipulators in the form of collaborative robots. The other goal is to create an assistant system for lower back and knee joints to support worker’s muscular strength. His research has passed the cold winter and reached spring as the dawn comes after a long dark night. Though challenges will still present themselves, we hope the experience at UST will provide ever-lasting fuel to Kim.