An alumnus of UST acquires patent rights in Korea, USA, and Japan for a construction method that increases the bearing capacity of soils 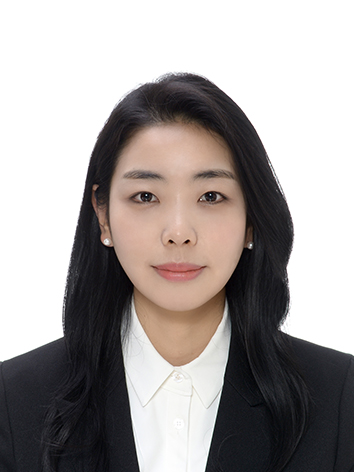 An alumnus of UST acquires patent rights in Korea, USA, and Japan

for a construction method that increases the bearing capacity of soils

The construction method for which Dr. Young-eun Jang, an alumnus of UST (University of Science and Technology), filed a patent application during her doctoral studies at UST has been granted patent rights in Korea, USA and Japan.

Generally, when buildings are being constructed, there is a concern that the stability of the building may be hindered if the foundation soil is weak. As such, the micropile construction method, which is drilling the soil, inserting steel bars into the soil, and grouting (filling up the gaps with cement, etc.), has been used in order to secure the bearing capacity of the foundation soil. However, the existing micropile construction method has its drawbacks, in that it is easy for construction only when the foundation soil is bedrock, and in that it has a long hardening time due to the cement being filled from the bottom of the drill and the process having to be repeated in order to supplement the contraction phenomenon.

As such, Dr. Jang developed the technique of constructing with waveform micropiles that have shear key in the grout rod part that composes the existing micropiles. This technique integrates the hardened grout rod and steel bar by creating waveform and inserting the steel bar through the process of pressure injection and pullout after the excavation to the planned depth is complete.

As a result, the steel bar transfers more weight to the surrounding soil through the grout rod, which increases the bearing capacity and stability compared to the existing micropiles. It also shortens the length of the stake, increasing the economic feasibility. Furthermore, this method secures the bearing capacity in soils that have lower strength than bedrocks, which has the effect of increasing the construct ability. 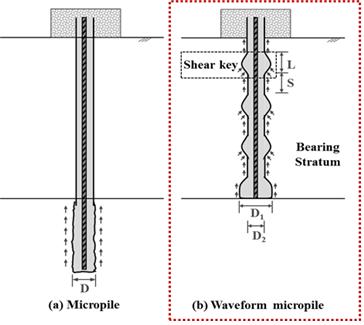 <Image 1: A comparison of the concepts of the existing micropiles (a) and waveform micropiles (b)>

<Image 2: A conceptual diagram of construction order of waveform micropiles>

Dr. Jang filed an application for this method that she developed with her academic adviser during her doctoral studies at UST, and registered the Korean patent in May 2018. The patent name is “WAVE-SHAPED GROUTING BULB OF MICROPILE AND METHOD FOR FORMING SAME.” Furthermore, this method successfully acquired patents in the United States in December 2019 and in Japan in March 2020. In the case of China, the application for a patent has currently been filed.

Dr. Jang commented, “During the five years of my doctoral studies, I was able to participate in the first stage of a major project at the Korea Institute of Civil Engineering and Building Technology (KICT) until the completion of the project, and in the process, my overall research performance abilities improved, and I was able to build up my research career in an unbiased manner.” She added, “This was possible because I was attending UST, which utilizes government-supported research institutes as its campus.”

Furthermore, her academic adviser, Dr. Jin-tae Han, commented, “This technique has been transferred to Daeryeon Construction, a small and medium-sized company, and has been applied on site at construction sites, showing that its commercialization has been successful.” Dr. Han further noted that “this technique will be applicable to apartment building vertical extension remodeling projects or old structure repair and reinforcement projects in the future.”

Dr. Jang received her doctoral degree in 2018, majoring in Smart City and Construction Convergence of the UST- KICT School. After receiving her doctorate, she was a postdoctoral researcher at Ulsan National Institute of Science and Technology (UNIST), and since December 2019, she has been working as a senior researcher at the Korea Atomic Energy Research Institute (KAERI).

UST nurtures talent in the fields of science and technology by educating students at 32 national research institutions subsidized by the government. Students receive a site-centered education, utilizing cutting-edge research equipment at the research institutes. Since producing its first class of graduates in 2006, it has produced a total of 2,523 talented individuals, including 840 people receiving doctorates and 1,683 people receiving master’s degrees.