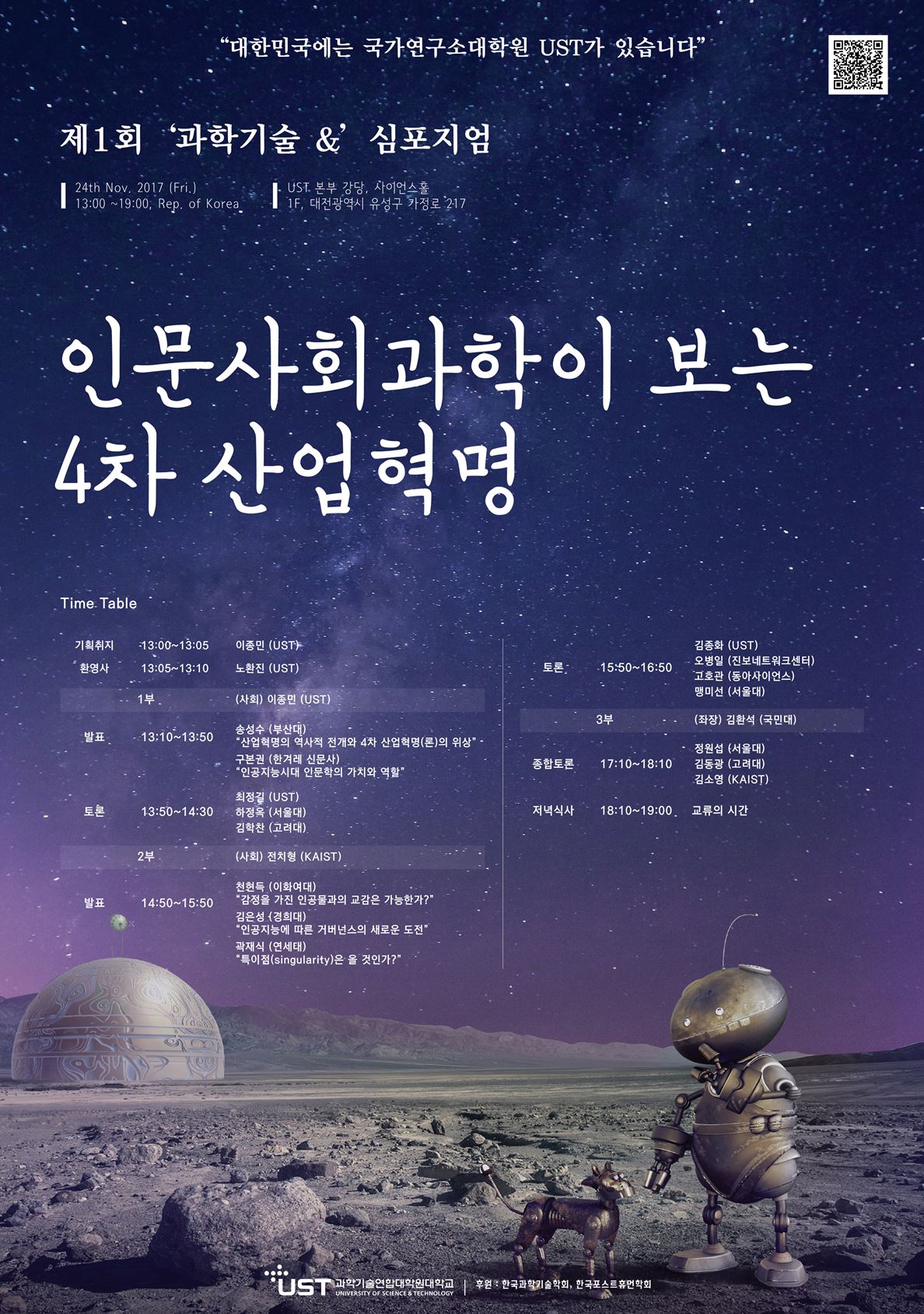 The University of Science and Technology (UST, President Moon Kil-choo) hosted the first “Scientific Technology &” symposium at UST headquarters in Daejeon at 1 p.m. on November 24 (Friday).

The symposium was conducted in such a way that experts in science and technology and experts in other fields got together and discussed specific topics, taking various perspectives.

In this symposium, about 20 experts gathered and discussed the technological changes caused by the Fourth Industrial Revolution and looked closely at the discourse surrounding it. In particular, the symposium focused on technological changes and intricately intertwined multilevel social problems (industrial history and technological innovation, cognitive science and robotic ethics, big data and governance, Internet of Things and personal information protection, shared economy and autonomous vehicles, SF literature and discourse analysis). Discussion was also made on interesting talking points such as whether the changes caused by the Fourth Industrial Revolution redefine the meaning of humanity and determine our future, and how the concept of singularity in SF affects people's perceptions and policies.

Roh Whan-jin, the director of Teaching and Learning at UST, delivered a welcoming speech, followed by subject presentations and assigned discussions. Professor Lee Jong-min of UST presided over Part I of the symposium. ▷ Professor Song Sung-su of Busan National University (and president of the Korean Association of Science and Technology Studies) presented ‘“The Historical Development of the Industrial Revolution and the Status of the Fourth Industrial Revolution”▷ Ku Bon-kwon, a reporter for The Hankyoreh newspaper (Life in Digital Research Institute) presented “The value and role of humanities in the age of artificial intelligence.”

Part II of the symposium, with Professor Jeon Chi-hyung of KAIST as the chair, featured topic presentations by Professor Chun Hyun-deuk of Ewha Womans University on “Is it possible to communicate with artifacts with emotions?” ▷ by Professor Kim Eun-sung of Kyunghee University on “New challenge of governance based on artificial intelligence,” and by writer Gwak Jae-sik on “Will singularity come?”

In the comprehensive debate in Part III, Jung Won-seop (Institute of Philosophy at SNU, the Korean Association of Posthuman Society), Kim Dong-gwang (Institute for Science & Technoloy Studies at Korea University), and Kim So-young (KAIST Graduate School of Science and Technology Policy) examined various discourses surrounding the Fourth Industrial Revolution in the framework of the humanities and social sciences and discussed the future course for humanity and society. Professor Kim Hwan-seok of Kookmin University (sociology) played a key role as the moderator in encouraging the participation of the audience, encompassing the presentations and discussions in Part 1 and 2.

Professor Lee Jong-min of UST, who planned and organized the symposium, said, "Due to the rapid development of science and technology, various changes are taking place in many areas of society," adding, “We wanted to look at the interactions of technology and society to revisit the technological changes in a larger context by looking for the continuity in discontinuities. With the UST ‘Scientific Technology &’ symposium, we hope that scientists, humanities scholars, engineers and social scientists will each be able to share their concerns from where they stand and collide their imaginations to shape the future together."

“It is very meaningful for experts with diverse backgrounds to come together and exchange opinions based on a shared awareness of problems,” said President Moon Kil-choo, adding “We will continue to hold the ‘Scientific Technology &’ symposium in order for UST to make contributions to the healthy development of society and scientific technology.”